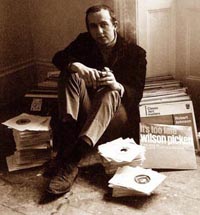 After quitting The Alan Bown!, Jess headed back to Kidderminster to re-think his longer-term goals and take stock away from London.

“The stuff I was writing was too soft and light for Alan Bown. After about a year of that, I split back to Kidderminster to play with the people I was closer to.Then, I had a telegram from Guy Stevens (at Island Records) that said, “Give me a ring”.

To term Guy Stevens as simply an ‘executive’ with Island and running their Sue label is, a considerable misnomer and, belies his standing in the industry.

In short, Guy was one of the most influential figures in popular music – and certainly within that particular era.

He was not strictly a manager, producer or musician in any full-time sense but his rôle as a catalyst that led to the coalescence of nascent talents into truly formidable wholes must never be underestimated – despite the fact that he spent longer in prison, for drugs offences, than most people in the music industry of the time.

When Guy got in contact, one sat up and took notice. Simple as that. And, as Jess said at the time:

“And, when I rang him he asked me to come down and see him and Chris Blackwell. I went down and rapped with them and they helped me get the band together. Bronco conjures up rough and smooth really; western scenery, home on the range and that conjures up something warm that we want our music to sound like.”

The ‘group’ that Jess was referring had, as its antecedence, roots that can be traced back four years to 1966 to The Band Of Joy who, at which point included Robert Plant (vocals) and Pete Robinson (drums).

Plant, despite being still in his teens, had already released one single with his former band Listen as well as two solo singles for C.B.S. Records. However, due to conflicts with the band’s management Plant left the group the following year and went on to (confusingly) form his own Band Of Joy but that band soon folded and he subsequently rejoined the original incarnation.

During 1967 the Band Of Joy comprised Plant, Kevyn Gammond (guitar), John Bonham (drums), Paul Lockey (bass) and Chris Brown (keyboards). They became one of the major bands operating out of the burgeoning Birmingham scene and toured Britain the following year as support act to the American singer Tim Rose before folding.

Robert Plant then, briefly, joined Hobbstweedle, before he and John Bonham were invited to join Led Zeppelin with Jimmy Page and John Paul Jones.

Meantime, Robinson, Lockey and Gammond started to work with Jess and the earliest incarnation of Bronco was formed. However, Lockey soon left to be replaced by John Pasternak (bass) while Robbie Blunt (guitar) completed the line-up.

Pete Robinson – “It was Kevyn who first contacted me and we had our first get together at Johnny Pasternak’s Mum’s house. Being young, I suppose I was a bit in awe of Jess, he had come from a very well known band, and it was him that Island Records had put their faith in.”

“We had our first ‘musical’ meeting – as the five of us – in a Kidderminster pub. Eventually rehearsals moved to Arley Village Hall; this was great because it was just round the corner from the ‘Bellmans Cross’ pub! At first we just jammed together on a few ‘West Coast’ tunes and then moved onto working on original material of Jess’ and Robbie’s.”

Before too long, Bronco started playing a handful of shows. On the 14th December ’69 – as noted from the John Coombes diary of Kidderminster-area ‘events’ – Bronco played their second ever show at Franks, the old base from which The Raiders had operated. ‘Their music ranged from jazz to blues and country with Jess Roden on vocals and on fine form.’

Pete Robinson – “Johnny and Kevyn moved into a farm house not far from the rehearsal hall and I quickly joined them, this really helped the band get tight. I had a good friendship with Johnny both on and off stage, we worked well together, he was a great bass player.”

“Our first stab at recording was at Olympic Studios overseen by Guy Stevens and we recorded a couple of our more ‘rocky’ sounding tunes with him.”

Bronco, who were still playing the occasional show at the time – for example at Kidderminster College on June 18th – were then introduced to (parts of) the waiting world via the summer release of the first of the (now legendary) Island double-album samplers; Bumpers.

Disc One, side one, track two – and that song Jess was referring to – Love.

Bumpers itself was issued in various permutations around the world. 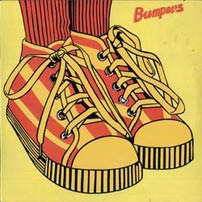 On the British release Bronco’s track is sandwiched between Traffic’s magnum opus Every Mother’s Son and Spooky Tooth’s downright grunge (before the term had ever been coined) interpretation of I Am The Walrus. Even so, on the original release the title of the Bronco (source) album and its catalogue number were wrongly listed. And, the mix used different to the final one on Country Home.

In Scandinavia, Bumpers was pared down to a single album and Love opened up proceedings on side two while in Australia and New Zealand, the track-listing differed wildly with Bronco’s song being left out entirely.

Nevertheless, that one song was the precursor for things to come because, as the leaves on the trees turned to autumnal golden, came Bronco’s first (and, indeed, only) single – Lazy Now which was released in October.

Moving away from Alan Bown! towards Otis and Marvin