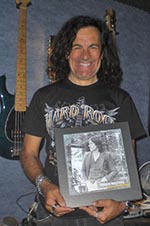 A professional musician and a JR connoissuer, Kev Moore has complied a very thorough review of the Anthology. It’s a long read but a delightful one. Take the time. Meanwhile,  with thanks to the man, here’s a few tasters…

“…It’s not just the unheard tracks that are a delight in this collection. Many of the familiar songs are presented on CD for the first time, and getting the treatment they deserve. The Bronco material for instance, sounds beautiful and crystal clear, compared to the ‘double CD’ that’s out there.”

“… Ray Charles’ “Black Jack” is another fabulous surprise. The number of white English vocalists who can deliver this song so soulfully must be very few and far between indeed. ”

“…Perhaps the most important disc of The Anthology is Disc 6 – named ‘The Sub’s Bench’. It contains tracks that, set aside for consideration after Neil and Jess had spent so much time poring over hundreds of ours of material, eventually were deemed too good to exclude. It gives us a clue as to the real wealth of music that Jess created throughout four decades, namely that, even with such an all-encompassing project such as this, it is incredibly difficult to do true justice to the legacy of such a diverse, creative and gifted artist.”

“…’Storm and Stone’ is fast becoming one of my favourite Jess Roden tracks. Featuring a stellar line-up including Robbie Blunt, Mike Kellie and John ‘Rabbit’ Bundrick, it’s perhaps where Bronco might have gone.. at any rate, it’s a scary thought that, were it not for this project, this song would have sat gathering dust in some God-forsaken storeroom somewhere, deteriorating by degrees, while good money goes into promoting the likes of Jedward. Where on earth did we go wrong?

“… Also included  is a JRB live favourite – The Eagles’ “Desperado” – illustrating just how well they could take even a well-known song and make it their own.  We’re well over three minutes in, it’s Billy Livesey and Ronnie Taylor on Piano and Sax, holding the room. No-one has set a scene better, then we’re into the verse, and Jess owns it. What’s not to love?  Listening to this, and further live unreleased gems from the JRB on this final disc – including the wonderfully restrained ”Too Far Gone” and the acoustic led and beautiful “Feelin’ Easy” – I marvel at their mastery of light and shade. They effortlessly move from a whisper to a roar, and back again, at will. There is no greater pleasure  than to observe a band playing with this kind of ease. It is pure joy.”

” … a number of lovely surprises, such as an alternate version of The Humans’ “Surrender to your Heart” augmented by Steve Winwood and the late great Jim Capaldi.  Another curio is Jess with “The Muscle Shoals Swampers” on  Capaldi/Winwood track “Let me make something in your life”, produced by Island supremo Chris Blackwell, it seems to channel Alabama, where at least part of it was recorded.”

” … The Anthology closes with a stunning version of Bill Withers’ “Ain’t No Sunshine”. It’s always been a singers song. It’s one of those that sorts the men from the boys. Here, there is no arrangement to hide behind. It is simply Jess, strumming a guitar and singing as only he can. It is the distilled essence of the entire project, of a career. A man with an extraordinary voice.”