And… the band started to step on the gas a bit because, in their early days, all Midlands’ ‘beat groups’ set their sights on gaining a toe-hold as opening acts on the rapidly emerging Birmingham ‘beat-scene’ – a crucial part of which was establishing themselves on the Regan Circuit.

This ‘circuit’ consisted of The Plaza in both Old Hill and Handsworth as much as it did the Ritz in Kings Heath since, at that time, the circuit’s headliners would be mainly from further-flung metropolises – The Beatles, The Kinks, The Animals, The Searchers, Manfred Mann etc.

Nevertheless, there were further changes ahead – but, evertually, The Shakes’ line-up settled.

‘I replaced Billy Davies and then Pete Waldron left the band when we turned ‘professional’ (surely a misnomer – high school girls used to fund our espresso and sarnies in the local coffee bars). Johnny P switched to bass and Sean’s dad signed as security for all the new equipment we bought (a huge-great bank of 4 x 12s).”

At this point, the Shakedown Sound, almost overnight, started to become a pretty busy group – playing halls in the local area as well as clubs and dance halls in and around Birmingham.

The shows included The Elbow Room, a club frequented by Messrs Winwood, Wood and Capaldi – later, of course, to form the nucleus of Traffic.

They also often played The Whisky-a-Go-Go, sometimes backing but more often opening up for / supporting a wide variety of Blues legends such as Little Walter, Screamin’ Jay Hawkins, T-Bone Walker and Buddy Guy.

Other greats such as Sonny Boy Williamson and Ike & Tina Turner also played The Whisky alongside other local bands of the time including The King Bee’s (featuring a young Carl Palmer – later of Atomic Rooster and, of course, ELP), The Modonaires, The Moody Blues, Denny Lane and The Spencer Davis Group

The Whisky was situated above Chetwyns on the corner of John Bright Street and Hill Street in Birmingham and was not just a cult-club but also right on the cutting edge for urban 60’s live Motown & blues band music, dance styles and fashion.

And, as the strong following for R&B developed, so did the first All-Nighters come to be.

All nighters were Friday and Saturday events, generally lasting until 8am the following morning;  The Whisky would pack in 250 onto its two floors – live bands were on the first floor while the second was reserved for DJ’s.

‘On some Saturday nights, we would start off in Worcester at the Co-op Halls, then drive over to Handsworth on the outskirts of Birmingham for a set at The Plaza.

‘Then, finally, we’d tip up at The Whisky (it was on two floors over a clothes shop) in Birmingham City Centre for the all-nighter.”

With their reputation on the rise, The Shakedown Sound signed to a London Agency (Malcolm Rose) and began to play the in-vogue-at-the-time round of package tours; one such being bottom of the bill in Great Yarmouth to The Rolling Stones.

Also on the bill were The Walker Brothers, Lulu and Jagger’s main-squeeze, Marianne Faithfull – the very next day and The Stones would meet Allen Klein for the very first time…

By now, The Shakes’ set was starting to include early soul as much as R&B and a Mod following grew apace; besides their club shows – such as The Gaff in Banbury and the Ricky Tick Club in Windsor – they were also out supporting The Who and The Small Faces.

One return ticket to Slough later… 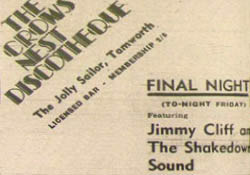 As 1965 turned into the year of World Cup Willie (1966) – and not long after another support show in Birmingham at The Silver Blades, the winds of change blew once again for Jess.

“Johnny had a girlfriend, and… y’know, we were young kids, seventeen and so on. And, he was thinking of getting married… and, basically, all our amplifiers and everything was broken, all the cymbals were trashed because we used to smash things up a bit a la The Who – we really were a bit of a renegade R ‘n B band. And so, in a sense, everything was coming to the tragic end of its life.

“We weren’t doing that many gigs either; we were working perhaps once, twice a week. There was an agency that used to book us out but, we weren’t getting much money and it was all a bit sort of hopeless really.

“So, I didn’t really have any serious intention to move on but, being given the opportunity, it was a natural really.”

One ‘phone call and a return-ticket rail journey to Slough later, Jess quit the band to move to London and work with Alan Bown.

‘We would either ask to kip down at the venue or drive to a lay-by and once, a beach in Wales. Heck, you could drive and park a vehicle almost anywhere in those days.”

Jess and the Shakes support The Who and Small Faces